Participation of JSC «Concern in the international forum has become the significant event in the Concern’s activities and has determined the perspective steps of the further effective works in fulfillment of important state defense orders and cooperation programs.

It is worth noting that this year forum attracted much attention of visitors and exhibitors to the Russian warfare market, giving a great impetus for the Russian OEMs to upgrade their equipment and to improve technologies in their products manufacturing. Defense industry is considered to be the leading branch of the Russian economic, defining in many ways its technologic development and growth.

The interest of  forum visitors to JSC «Concern products remains unchanged. The joint R&D of all integrated enterprises of the Concern, the production diversification significantly increases the level of demand for our technologies: to sea, shore and radio electronic warfare systems as well as to double purposes systems.

The exposition of JSC «Concern during forum has been visited by the official delegations from the Main Command of the Russian Ministry of Defense (Navy) headed by Admiral Vladimir Korolev, of the Russian Navy and by  Victor Bursuk, the Deputy of the Navy for armament. The First Deputy General Director Pavel Antonov and the chiefs of all scientific&production departments of the main Concern’s directions of activities informed about the current situation of the defense order fulfillment for the Russian Navy and about the further service of the earlier supplied systems for all fleets of our country.

In the frame of forum the negotiations were hold between the Chairman DRDO and Secretary Department of Defence R&D Dr. S Christopher and the representatives of BrahMos on the cooperation in the sphere of onboard warfare systems creation including homing head. These negotiations will give a new impetus to cooperation development in this sphere.

The representatives of JSC «Concern took part in the 2nd stage of the military industrial conference headed by Deputy Minister of industry and trade of the Russian Federation Oleg Ryazancev and by the Secretary Defence Production of MoD of India Ashok Kumar Gupta. During the conference the relevant issues were discussed on cooperation between Russian and Indian industries, including the organization of the joint ventures for Make in India program realization as well as the issues of life cycle support and after sale product maintenance of Russian warfare systems for Naval forces of the Republic of India. During the plenary meeting of the conference the MoU was signed between JSC «Concern and Indian company Elcome Integrated Systems Pvt. Ltd. The signing of the MOU provides great opportunities to cooperate directly with foreign customers in the field of the military products life cycle support and after sale product maintenance of the previously supplied equipment.

We are grateful to the Organizing Committee of Forum for arrangement of such event as well as to all our exposition visitors, which were interested in our production.

We are ready to develop our productive cooperation in all areas of our activities. 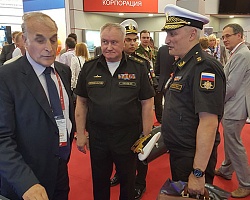 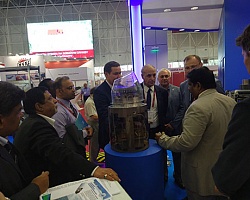 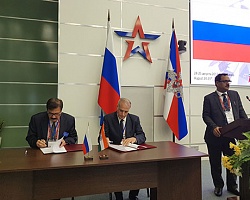