JSC «Concern is an associated member of Russian Academy of Missile and Ammunition Sciences (RAMAS), recreated in 1995 on the decree of the President of the Russian Federation and appeared as a legal successor of Academy of Ammunition sciences, founded in 1946.

Section № 1 — «Problems of development of surface shipbuilding, radio electronic systems and Navy armament». The section decides the issues of standalone shipborne and coastal systems of missile and artillery weapon, considers the issues of finding, developing and implementing new intellectual management technologies of sophisticated shipborne systems in the context of conflict information situation. Chairperson of the section is corresponding member of RAMAS, general director of JSC «Concern , doctor of engineer, Professor .

Section № 2 — «Problems of development of submarine navy, surveillance system of underwater environment and communication», in addition to general scientific problem of the submarine navy and weapons, considers the issues of mathematical, physical and semirealistic simulation of missile, torpedo and mine weapon. This section also considers issues of complex simulation of armament plan to solve the challenges of fighting at the ocean and naval theatres of operations. Chairperson of the section is corresponding member of RAMAS, deputy chief of military training center of Naval Academy named after navy admiral , candidate of engineering science, assistant professor A.

Jointly with other departments of RAMAS, department № 5 organizes and conducts fundamental and applied research in areas warrant the establishment of joint forces unified weapon systems. 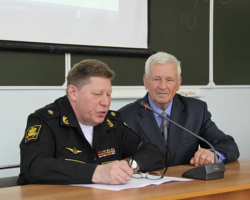